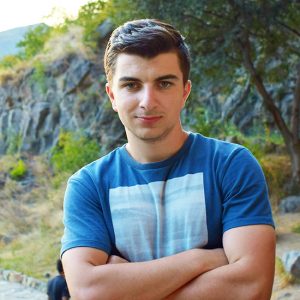 My background – The cancer is still remaining as one of the biggest problems faced by millions of people both inside and outside of Armenia. Around ten thousand new cancer patients are admitted annually into Armenian cancer treatment centers and hospitals alone, vast majority of which will never recover from this devastating condition. This truly worrying statistics was the first trigger for me to seek a medical career. By the time I entered high school, I had one clear aim in my head: to build my academic career in a way so I can help cancer patients and their families to fight the disease. This is why I started my undergraduate course in biomedical sciences at King’s College London, which I graduated this year with a first-class degree. Starting from the upcoming academic year I will start my master’s degree course in “Molecular Health Sciences” at Swiss Federal Institute of Technology Zurich (ETH Zurich), which is one of world’s leading biomedical and biotechnological research institutions.

After my first year at King’s College London, I interned at the National Centre of Oncology after V. A. Fanarjyan (Yerevan, Armenia), under the direct supervision of Professor A. Tananyan, with an aim to learn more about the condition and problems of Armenia associated with this field. Specifically, what are the current possible surgical, radio- and chemotherapeutic treatment methods available in Armenia and what is the potential of my country. Additionally, during and after the second year at King’s College London I joined Professor Joy Burchell’s research group, based in “Guy’s Cancer Centre” (London, UK), as an undergraduate research assistant. During my time with Prof. Burchell’s group, I submitted a proposal for a project that aimed to investigate the benign breast cancer forms and characterize those tumours that are under increased risk of becoming malignant. As a result, my project received a university grant.

Before starting my application for graduate school, I was choosing between career paths of a clinical oncologist and an oncology researcher. Considering the above-mentioned experiences, I chose the second, because currently there are not many cancer treatment methods utilized in the clinics and majority have enormous amount of side effects and low efficacy. Rather than delivering these widely adopted and often inefficient treatment methods, I felt that I could make bigger impact by conducting research on novel therapies. This was the main motive behind my application and subsequent admission to ETH Zurich.

Long-term Goals – One of my main aims is to advance my knowledge and experience in cell biology, molecular genetics and immuno-oncology, acquired at King’s College London, by gaining more theoretical knowledge and practical skills in bioinformatics, biotechnology and bioengineering. This will help me to establish new laboratories in Armenia that are equipped with state of art technologies aiming to increase the accuracy and effectivity of cancer diagnosis and its prevention as well as potentially develop new anti-cancer therapies and vaccines. In addition to my expected input into Armenia’s science and healthcare systems, I am sure that this course will give me an opportunity to contribute to the advancement of academic infrastructure of Armenia. Moreover, I want to invest the knowledge and experience acquired at ETH Zurich in development of the “Armenian national cancer database”, which, I believe, will increase the effectivity and the specificity of cancer treatment. Specifically, following the acquisition of biopsies from cancer patients the malignant genetic mutations, specific to the particular cancer subtype, can be detected and “mapped” utilizing DNA and/or RNA sequencing technologies. Following the identification of these alterations, they can be inputted into a data collection platform. Using this database researchers can acquire specific cancer samples with particular set of mutations and use it in designing novel targeted therapies that will be beneficial for certain patients but not the others. Furthermore, the information stored in this platform can also be utilized by clinicians in stratifying patients to maximize the beneficial effect of anti-cancer therapies, rather than using one treatment for everyone, which will potentially lead to number of unwanted side effects. Moreover, information about the composition of the tumor immune-microenvironment will also be included, which will help to identify immunological biomarkers in addition to the genetic ones. Establishing such database in Armenia with the help of cancer patients living in Armenia will help to identify genetic or immunological modifications that are specific to the population not only on the national but also on the regional level; hence, can potentially serve in designing new, more effective therapies and also to “re-address” the already used ones. Similar platforms and catalogues, that include cancer subtype-specific biomarkers, are already being utilized by cancer research giants such as the UK, USA and Canada.

Furthermore, at King’s College London, besides my passion towards immuno-oncology, I was also interested in virology. This fascination led me to conducting a project as part of a research group working on HIV-1. As a result of this, I became a co-author of an article (paper) published in a scientific journal. Consequentially, during my time at ETH Zurich I also want to explore virology and epidemiology, especially when considering the challenge of COVID-19 that is currently faced not only by Armenia but also worldwide.

Because cancer and viral infections are, undeniably, one of the biggest global problems, any contribution can make a huge impact in improving the quality of lives for millions that suffer due to these conditions.

Short-term Goals – Shortly after the completion of my master’s studies at the ETH Zurich, I want to build a “bridge”, which can help to bring the technological and academic advancements from one of world’s leading universities and invest it into Armenia’s educational and scientific fields.

I believe that the rate by which country’s academic and scientific system develops can serve as a crucial indicator of its overall potential. In order to advance this ”indicator” I would like to organize or take part in conferences, seminars and talks on or off-line, with students living and studying in and outside of Yerevan as well as in the diaspora. Through this process I will share my knowledge and experience with them, potentially raising the awareness about several crucial global medical and scientific problems. This in its turn can serve a crucial booster for the development of Armenian healthcare and education, which are the two main pillars for socio-economic welfare and country’s consistent development.