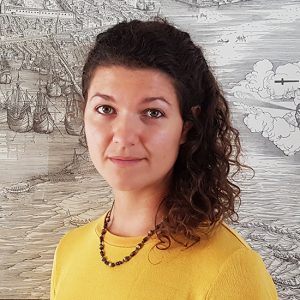 Coming from a background in Classics, Ancient History and Archaeology, I have been devoted to Armenian Studies since 2013 (University of Oxford for BA in Classical Archaeology and Ancient History and MSt. in Armenian Studies, University of St Andrews – University of Geneva PhD in Oriental Studies and Medieval History). I shall say a few words about my academic work, the community outreach project I have developed during my postgrad years, and my plans for the future.

My current research project is a Doctorate thesis, now approaching completion, focused on the Armenian scholar Anania Širakac‘i. Despite his fame as the first Armenian scholar in the “mathematical sciences”, this 7th-century polymath was given relatively little attention in academia, and the majority of works attributed to him are still awaiting a philological and historical analysis. Anania’s works might reveal a great wealth of information about the legacy of Greek and Hellenistic science and philosophy, a better understanding of the status of science in Armenia and Byzantium, and not last might allow to make connections about the dissemination and tradition of teaching throughout the Mediterranean world, continental Europe and the British Isles. Greek and Latin sources of the 7th century are scanty, and this Armenian corpus shall certainly aid our understanding of the period.

In more detail, my work entails a historical introduction to the context in which Širakac‘i lived and operated, which helps setting the author within a wider geographical and historical milieu. I have updated and amended the list of works traditionally attributed to him, in order to offer a tool for colleagues in Armenian studies and other historical disciplines who would like to approach the corpus, including manuscript tradition (when known), secondary literature, and translations.

The central part of my thesis is an in-depth study of a single text, the so-called Tiezeragitut‘iwn (Cosmology), for which I am making a new critical edition. I have therefore collected all known manuscripts that contain the texts or parts of it (from Matenadaran, from the Library of St James in Jerusalem and from the library of St Lazar in Venice), and I am carefully comparing them to try and reconstruct the original text. This endeavour involves a research of older sources, too, which the author knew and used, such as writings of the Church Fathers and of non-Christian philosophers. Before me, two illustrious Armenian scholars have worked on the Cosmology: Patkanean at the end of the 19th century and Abrahamyan in the 1940s. Since their time, Armenian libraries catalogues have grown, and I was able to see more manuscripts; in particular of the oldest witness available (a 13th-century partial copy). Moreover, advancements in our understanding of Ancient Astronomy, of philological methods and of the tradition of texts and knowledge in Antiquity allows me to review and revaluate some of the interpretations proposed by my predecessors.

Whilst preparing a new critical edition of the Cosmology, I am also producing the first complete English translation of this text. This treatise contains a description of the world, with chapters about Land, Sea, the Stars, the Sun and Moon (etc.) and preserves a number of theories, refutations and quotations which are of great interest well beyond the scope of Armenian Literature.

This introduces the final part of my thesis, that is an analysis of the text from a historical point of view. I shall lay out the structure, content and context of this text delving into different themes. One is the scientific milieu in which Anania inserts himself, identifying the sources which influenced him. Secondly, I shall highlight the innovative aspects of his writings, and not last the Author’s methodology, and how the contents and structure of the Cosmology compare to previous Armenian authors (most notably Eznik of Kołb), and those who belong to the Byzantine and Latin traditions. Aspects of the text’s contents also deserve attention, in particular Anania’s understanding of moon phases, eclipses and the water cycle. Finally, I shall set up a list of his lexicon: many terms are used in peculiar ways, and some are technical terms without precedents. Compiling such lists might contribute to the production of an updated version of our Classical Armenian dictionaries in the future.

Within the context of Armenian Studies, it is my hope and ambition to prompt more scholars to engage with Anania’s corpus. Placing my endeavour in a broader context, it shall certainly allow colleagues across disciplines to be able to gain access to the fundamentals of Anania Širakac‘i’s work, a key intellectual figure whose role in the History of Science, of Philosophy, and of Humanity at large is still awaiting the reassessment and attention it deserves. My PhD thesis will be submitted by the end of the 2020-2021 academic year, and I am planning to apply for the further stages along the academic path.

Beyond the scope of my current research, I have also been able to promote the teaching of Classical Armenian through a new course and textbook (in-the-making). I organised, managed and run the courses myself with the patronage of Casa Armena – Hay Dun in Milan (Italy). The course attracted people of Armenian descent as well as Italians, and my students came from across a spectrum of professions and fields of study (a total of 10 completed all three levels of the course, aging 20 to 75). Having a strong group of committed students, courses carried out through the toughest weeks of the pandemics in Northern Italy, and the whole advanced course was held online, with very positive outcomes. Whether in person or online, we plan to resume our meetings from September 2020 and start a Classical Armenian Reading Group. In the meantime, I shall complete and revise the course so that it may become a new textbook to learn Classical Armenian for Italian-speaking students.

With the help of the local community, I have also started the “Literary afternoons” at the Casa Armena – Hay Dun in Milan.  This project aims at promoting Modern Armenian through readings of Armenian authors in the original (out loud) and in translation, as an effort to kindle the interest of the community in Armenian Literature, attract people my age to literacy (most of them have never had to opportunity to learn how to read in Armenian), and offer those of the previous generations a chance to revive their waning knowledge of Armenian (mostly Western – the few alumni of Murat Raphael school in Venice are aging, and no significant efforts were made to make up for the vacuum that the shutting down of the school left behind). It is our hope that these gatherings may restart after the abrupt interruption caused by the pandemics.

Such initiatives did not only arise from a desire to gain precious experience as a teacher, or to enjoy leisure readings in good company, but also and most notably to allow more people, of Armenian descent and not, to approach this rich culture and develop the tools (most primarily linguistic, but not only), to be able to explore it further in their own time and as a community. These are but small, necessary steps to lead more people into the discovery of the wealth of Armenian culture, especially the language, literature and history.